I have always enjoyed settling into a long run of a show, with new audiences every night, swings and understudies going in and out creating a new dynamic onstage, and always something to improve in my own performance. But those itty-bitty runs-they are just as exciting and fulfilling!

There is a little theatre deep in the midwest, in Springfield, Missouri, the Tent Theatre. When I was hired to work there, as  a “guest artist”, to play Violet in 9 to 5, (the “Lily Tomlin role”), many people I told, scrunched their noses, cocked their heads and queried, “What theatre? What town?” Well, in this theatre, that is truly in a tent, you will find the most splendidly talented, enthusiastic fellow thespians, mostly students of Missouri State University. Midwestern friendliness-oh, they have that too. I wouldn’t have exchanged playing “The Tent” for two weeks for any length of any long run. Did I mention the band of 14, made up of mostly professors of music? The band rivaled anything you hear in a Broadway pit.

In case you are wondering how many years this theatre has been around…about 50!  I was so very honored to be asked back to perform One of the Boys for the finale of the 50th Anniversary Gala attended by the state’s Governor and alumnus John Goodman. So as the temperatures begin to heat up this summer, I know the energy is heating up as well on the stage of this historic tent. I am so lucky to have been a part of that history. 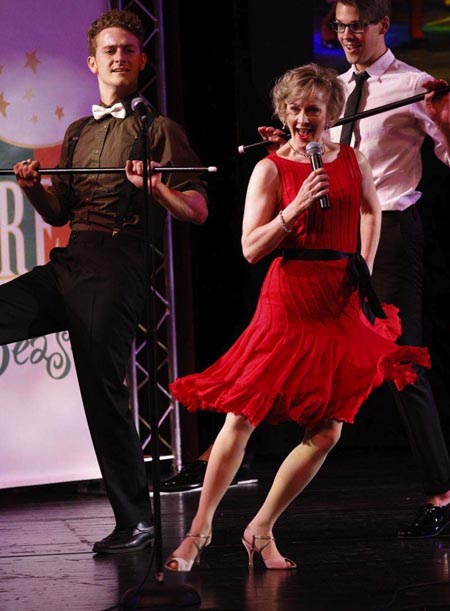 at the 50th Anniversary Gala of the Tent Theatre.